Dadi BrijinEdra was daughter in law of Dada Lekhraj

She lived with Brahma baba in Proverbial and Supernatural. She used to live at Mumbai Sion center and was in charge of Maharashtra zone. She left her body on Jan 1st, 1990 at 6:30 AM and got ready for different types of services with different names.

Dadi was the first luckiest human being to see the Incarnation of God.

Incarnation of God on this Earth.

She explained that unusual scene in this way – There was a sacred gathering going on at home with Dada Lekhraj’s Guru. In 1936, Dada spent Rupees Twenty five thousand on this occasion and many people were invited. Many people were seated but the way Dada was sitting and getting up was very unusual. Dada was in this world but I felt as if his body is far from him. His guru’s lecture was going on but he got up in the middle of the lecture, he never left such gathering in the middle before. My attention immediately went towards him and I sent Dada’s wife (Jasoda) to him. After she went to see Dada, I got a feeling that I should also go to check, so I also went in his room. I sat with him in his room and his wife went back to attend the gathering. I saw that there was a red rays in his eyes as if a light is ignited inside him. His face was also turned red. Room was filled with light. I also became bodiless. Suddenly a voice came from somewhere in the clouds, as if someone else is speaking from Dada’s mouth. That voice was initially slow and then became louder. That voice was –

That wonderful scene and voice was unforgettable till today. That environment was unexplainable and I still clearly remember that bodiless condition of that time.

After Dada opened his eyes, he started looking shockingly all around the room. He was completely involved into all the scenes that he visualized. I asked Baba, what did you see? Baba said, what was that? There was a light and some might, some kind of new world. Far above from that someone were there like stars and when stars used to come on Earth then some became Price and some became Princess. That might and light said that you need to make that world. But he didn’t mention that how to make it? How would I make such a world? Who was he? Some light and some might.

Since then Dada used to live in deep thoughts. He used to go in deep thinking and used to say, who was he? What kind of power it was that makes me view such divine rondeau and what’s the secret behind it? Dada’s family members also used to think that not sure what happened to him. Dada became introvert and we used to see him doing deep self-reflection and introspection. Later he himself came to know that God Father Shiva gave his introduction after incarnating in his body.

Tirelessly worked for the organization

BK Brother Ramesh Shah who saw Dadi Brijindra very closely in Mumbai, he shared about her that during the early days of foundation meaning for 16 years from 1936 to 1952, she tirelessly worked for the organization related work. She drove bus as a driver and when her bus met an accident, the news got spread in the world that women of India has awaken that she has started driving bus. She always kept her in front for every gross and subtle Godly service. And followed the rules of the Organization with agility and then with her own wish she has used her body, mind and wealth for Godly services. Who’s her work used to be done by servants earlier, she not only started doing her own work but also dedicatedly did service for the welfare of people. She never considered any work as high or low while doing services. Whatever services were given to her, she has accepted it thinking it as her fortunate and completed properly.

In year 1937 when Baba made a trust, she was also one of the main trustees who responsibly fulfilled all the duties. After this till 1951 when God father Shiva used to enter into the body of Brahma, she especially used to stay in front of Baba to understand the value of God’s word. She used to follow Baba’s order and instructions to understand and explain the Supernatural part of that time, and used to play a part to memorize the facts from those words.

She was from a popular and rich family of Sindh

She became daughter in law of Dada due to her blissful, religious family background and her complacency nature and somatic aura. She used to dedicatedly worship Lord Krishna in those days and used to completely follow modesty and manners related rules. She used to daily read Gita scripture and keep herself involved in fasting for God and Charity work. Before coming to spiritual knowledge, her name was Radhika and she used to cover her face with her Saree due to respect for the relationship (Daughter in law) that she had with Dada.

From beginning she used to consider Dada as great man in regards to nature, behaviour and impressions and used to respect him due to religious feelings but after sometime her faith got increased in him. When Dada started getting more involved into God’s remembrance and viewing divine rondeau, this impacted Dadi as well due to which she left covering her face with Saree. The reason being that she no more used to see him as Father in law or Dada Lekhraj rather see him as Lord Krishna. So now when she used to take food for him, she used to feel as if she is offering food to Lord Krishna.

Followed all orders of Baba.

When God Father Shiva started giving knowledge from the mouth of Dada (Later became Prajapita Brahma), she used to have complete faith on it. From the beginning time of spiritual knowledge, she followed all orders of Baba. Considering those words as God’s words, she practices them and took resolution to follow celibacy for rest of the life. Not just this but all her diamonds and jewelry that she had from both her family and in-laws family

Author went at Sion center in Mumbai to meet her

She used to be busy during the day time but she remained awake to share the biography of Baba during the night. During the conversation, she didn’t see even a single time that she is feeling sleepy or tired and cannot share more. Rather she said if I share this for many days and nights then also won’t be able to complete it and even if someone feeling sleepy, they used to lose their sleep after hearing the biography.

Author went at Sion center in Mumbai to meet her and saw that the decoration of the center was very simple and had austerity environment. She was a statue of affection and generous. Whenever author used to go Mumbai, he had a desire to meet her.

The Sion Fly-Over – Starting in front of Sion BK centre extending all the way upto hospital – was named by Mumbai municipal corporation after Dadi Brij Indraji, one of the original jewels of the Brahma Kumaris. It is a shining example of recognition by the world to a true spiritual leader who was in all possible ways the epitome of Women Empowerment.

This whole process of conferring this rare honour upon Reverent Dadi Brij Indraji was initiated and implemented by the Municipal corporation of Mumbai on their own behalf, recognising the amount of work Dadi had put into Sion and neighbourhood places from 1960s through 1990s till her last breath, inspiring people to adopt a clean lifestyle based on spiritual values. This is the first instance where an individual Brahma kumari’s name is being given to a Fly-Over in any metro.The function on 7th February was inaugurated by the Mumbai BJP president Shri Ashish Shelar in the presence of Respected Santosh Didi – Zonal-in-Charge of Brahma Kumaris Maharashtra, Andhra Pradesh & Telangana. 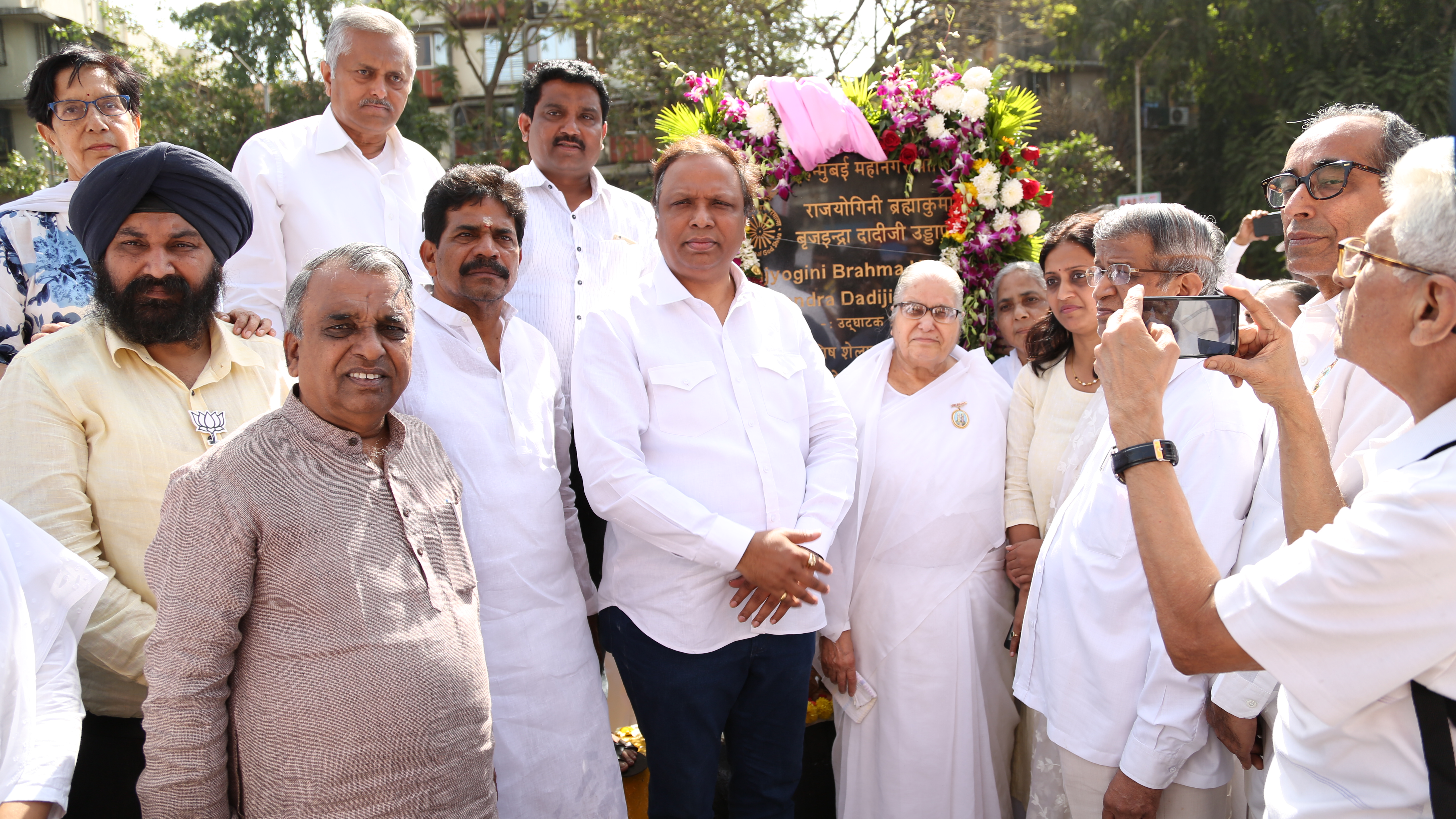 WHAT SENIORS HAS TO SAY…

Sparkling diamond in the crown

All the origin gemstones are the reasons for ‘son shows father’. They are the divine mirrors who with their actions evident the character of baba. How much mirror is important for the self-sight and others-sight! What did we remember after seeing the souls who are the special reasons? We remember Bapdada. What Baba used to do, how he used to walk – This is what to you remember right! So you are the mirror to evident Baba. Bapdada always rise up such special children above him. He makes them crown of head. You are the sparkling diamond of crown.

You are the makeup of Family

She used to do make from Childhood to proverbial and supernatural life, so with constant makeup became makeup. This is true right! Bapdada remains absorbed more than remembering all brave and master children. There is no need to remember who are already absorbed. Bapdada always evidence every special gemstone in front of world. So you are the special gemstone evident in front of world. You have extra help of happiness from everyone, and seeing your happiness everyone gets the tablets of happiness. That’s why everyone’s age is increasing as you get the blessings of love from everyone. Need to do lot of work, so you are the makeup of family. Everyone looks at you so lovingly, as if someone’s ciborium is taken then how their forehead will look like? If a person with ciborium doesn’t wear the ciborium then how he will look like, so you are the ciborium of family.

Lived a life of Simplicity

In her 50 plus years of life, she always said yes for every order of Baba and followed it. This way after following the orders, modesty, and rules, she became inspiration for everyone. She Enlighted the feeling of sacrifice in many people with to her full sacrifice, love, light nature. Even after belonging to a rich and blissful family, she lived very simple life and due the fragrance of her simplicity, Godly family members got directions and instructions.

More than a Director, she was a statue of Love and Boon

She used to take special interest in sharing the proverbial and supernatural biography of Brahma Baba, as she has seen him from her eyes and experienced it herself. There was a supernatural feel in her words, even after listening for two-three hours or two-three days, no one used to get bored. Rather everyone used to feel that Dadi should share something more. She used to get a sense of pride while sharing the biography and experiences, and goes into a minute of silence in the middle of story as if she is lost into the memories of Baba. Then starts sharing again, sometime with smiled face, or with astonished feeling, and sometime in deep thinking and this way she used to give such a pictorial description of each and every instance, which made everyone feel as if they are also present in that scene and viewing it from their eyes. Dadi used to operate such a big zone (Maharashtra) but more than a director she was a statue of love and boon. Whoever used to go in front of her used to get treasures of spiritual love, after hearing her sweet voice, seeing her beautiful smile on face and the reflection of Shiv Baba in her eyes. In Sindhi, Dadi word means Elder sister and in Hindi Dadi word means Grandmother (Mother of your father); after meeting her it feels like we are meeting our spiritual Grandmother. 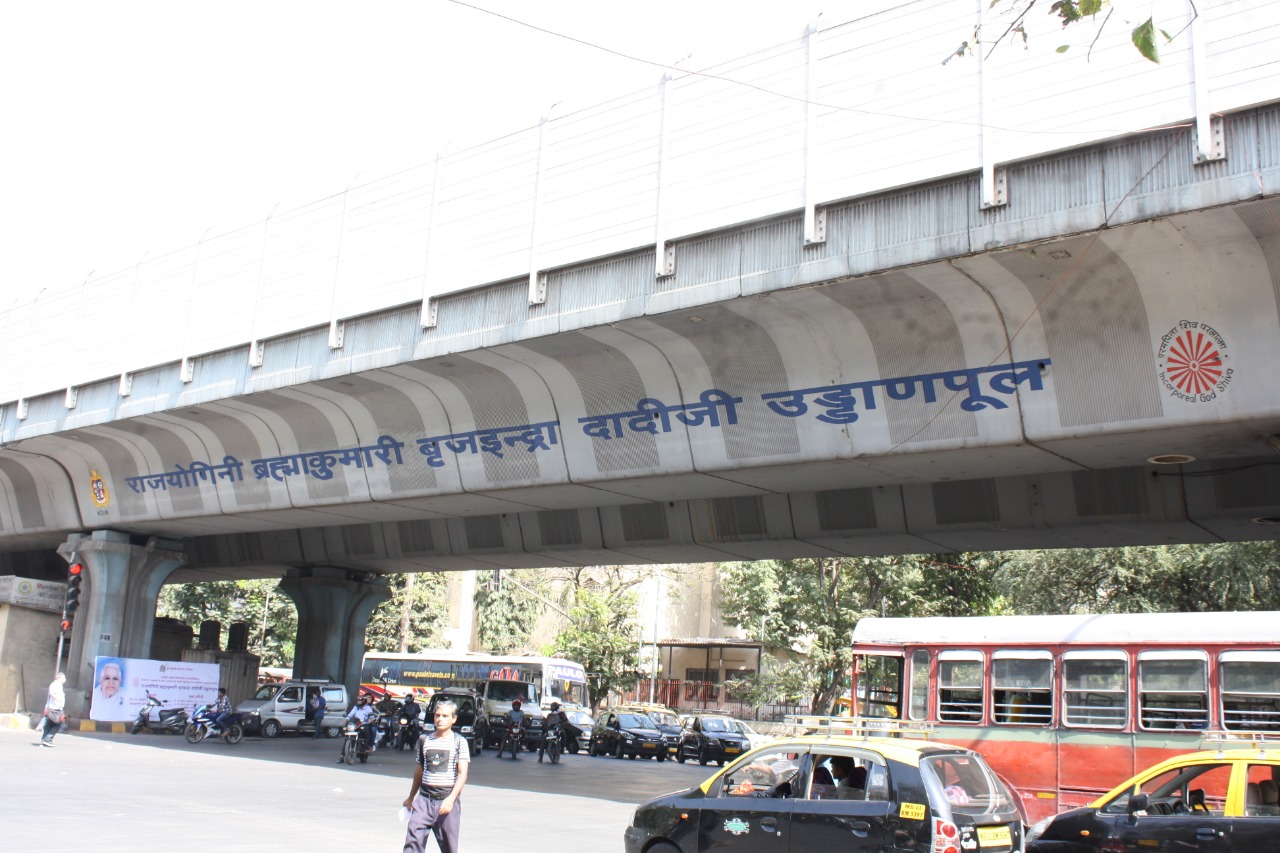 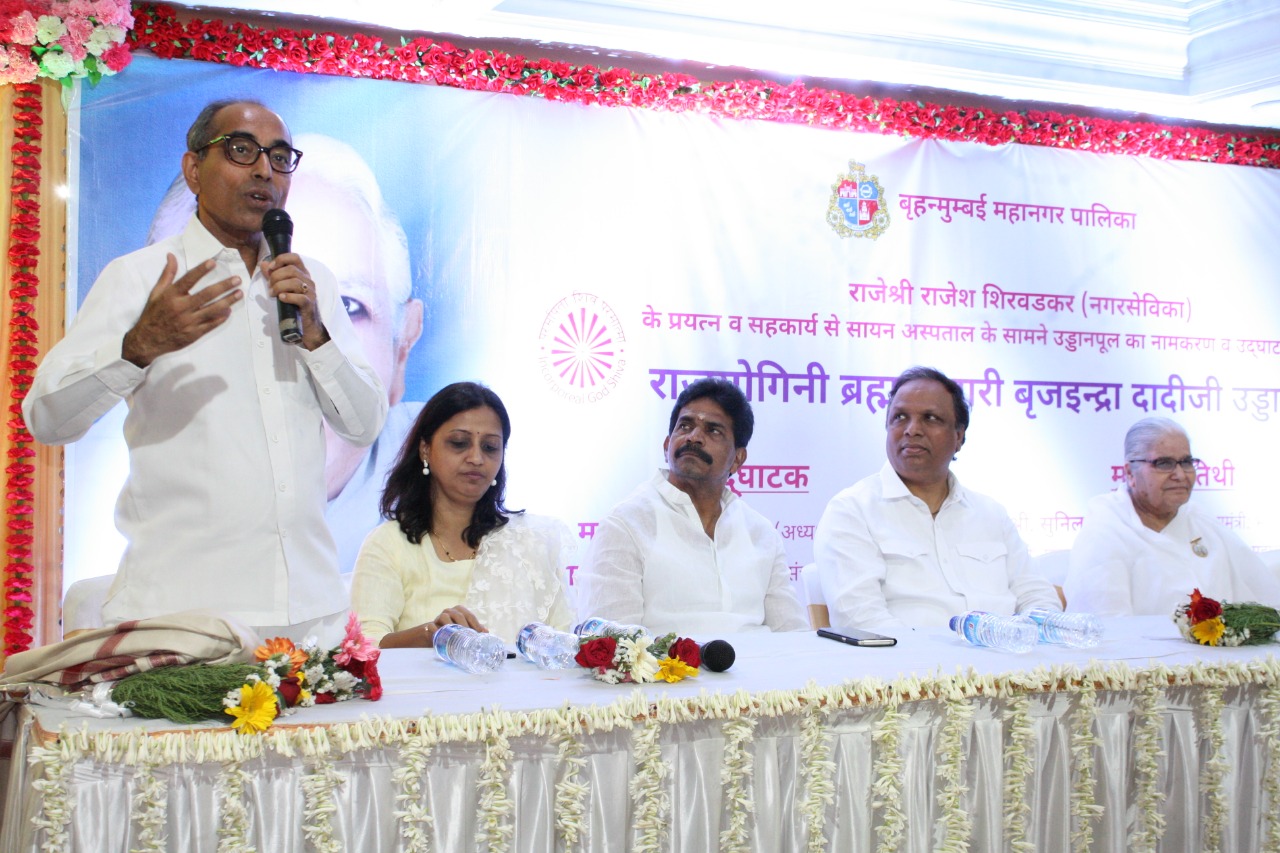